The long trip to Java 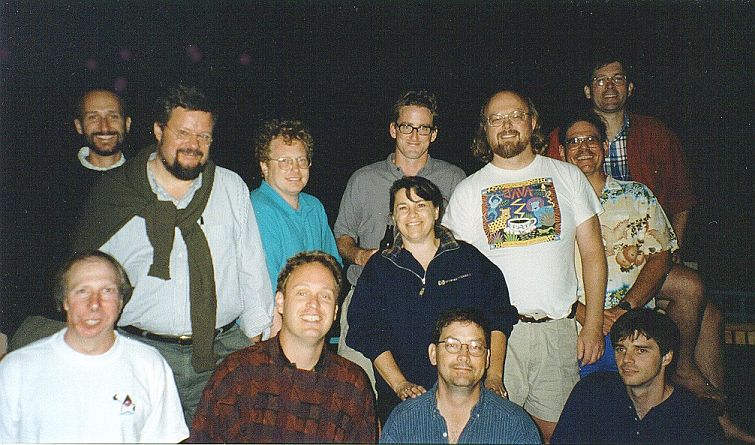 His bookshelf was full of the classics of computer science. Horowitz, Knuth, Foley and Van Dam, Xerox bluebooks, SIGGRAPH and OOPSLA proceedings, the collected works of Breathed and Larson. Clearly, James was not your garden variety programmer. In retrospect, I should have been in awe, lying prostrate doing my best Wayne Campell, "I'm not worthy" impression. Fortunately for me, I was too clueless to know who James Arthur Gosling was.

So, I worked my way through the CS curriculum and learned lots of interesting and esoteric programming languages like LISP, Scheme, Prolog, SETL, Forth, and SmallTalk. I spent the summer as the lead engineer on an ill-fated project to save the world from terrorism. We had a chemistry professor with a god complex who had slipped one morning in the shower and bumped his head. When he woke up, he saw a statistical relevance between capacitance, conductance, frequency and the amount of explosive material inside of a pair of capacitor plates. We spent the summer of '87 on the SUNY Potsdam campus in an abandoned dormitory, listening to the Iran Contra trials on NPR, while building the world's most expensive Rube Goldberg voodoo-statistics-driven capacitor.

We were ftping from the Suns to MIT to get stuff from GNU. Who can forget "ftp prep.ai.mit.edu"? It is where we all learned to spell "anonymous".

By the end of the summer of '92. James' language, Oak, was running pretty well. Ed and Craig's Star7 hardware prototype had successfully booted Chris' pared down SunOS. My graphics library was running well on the new display hardware. The Oak class libraries that Jon and I wrote were driving the user interface just fine. And we had all written a bunch of fairly credible consumer applications, like a television program guide, a shared message board, wireless paging, and drag and drop VCR programming. Chris, Jon and Craig even got the wireless data radios to call Oak methods over the wire. The Star7 prototype was finished. And no one died getting it there.

Bill Joy had always been the guardian angel of this project, swooping in to show his support, or save us from budget cuts, but after my blowup with Wayne, he took a more direct role. He wanted to use Oak as a systems programming language for his new operating system ideas. He was often comparing Oak to more complicated and elegant languages like Python and Beta. He would often go on at length about how great Oak would be if he could only add closures and continuations and parameterized types. While we all agreed these were very cool language features, we were all kind of hoping to finish this language in our lifetimes and get on to creating cool applications with it.